Information For Athletes & Others With Joint Stress and/or Pain

Arthritis is primarily inflammation in the joints. Causes can be wear and tear, the presence of toxins, autoimmune reaction or invasive organisms.

Osteoarthritis is deterioration of a joint from damage or possibly due to chronic infection.

Rheumatoid arthritis is more likely from irritation of the joint tissues from toxins. These may be byproducts of certain foods in the diet that may have allergic qualities and/or which have been overly consumed, or they may be from environmental contaminants.

Arthritic inflammation can be an accompanying condition with other ailments, especially autoimmune disorders like lupus and fibromyalgia.

Candida yeast overgrowth, fed by sugars, can release an excess of inflammatory toxins. Various bacteria or viruses could also contribute to the toxic load.

A body that is too acidic, too low in the pH of internal fluids, is more susceptible to arthritic problems. The uric acid wastes of meat and dairy consumption are common factors. Most grains and beans contain an excess of phytic acid that can also contribute to this state.

Additional sources of tissue inflammation may include public poisons in water, food or air from industrial, agricultural or weather manipulation practices.

Those with arthritic pain, osteoarthritis, other forms of arthritis, gout, joint pain, or anyone looking for relief and/or improved joint health, might enjoy one or more products we have available.

Be sure to get some Relief!

Are you one of the 38 million American adults that suffer from some form of joint discomfort? Has your joint mobility declined due to an overly active lifestyle, exercise, or normal aging?

The US Center for Disease Control predicts that the number of adults suffering from joint discomforts will increase to one in five by the year 2020.

Many people experience occasional stiffness or cracking of the joints. But prolonged discomfort can occur when cartilage in the joints begins to deteriorate. This can be caused by recurring joint stress, physical injuries or irritating toxins, with more or less potential due to heredity. Joint inflammation is usually accompanied by agonizing pain and limited mobility.

Chondroitin is a complex carbohydrate found in the connective tissue of all mammals. In the cartilage that cushions the joints, chondroitin will draw fluid into the tissues, an important property, as there is no blood supplied to cartilage. This fluid draws important nutrients to the area, making the cartilage spongier and more capable of absorbing shocks.

Chondroitin also shields healthy cartilage from early deterioration by preventing the production of certain enzymes that weaken connective tissue and overpowering other enzymes that stop nutrients from reaching the cartilage.

Many researchers are convinced that chondroitin can strengthen the protein strands that make up connective tissue. Some evidence has shown that, because it contains complex sugar molecules called glycosaminoglycans, it can reduce inflammation and repair cartilage, especially if the tissue has not been totally damaged.

Chondroitin seems to play an active role in reducing the pain that often accompanies joint problems. Chondroitin has also been used to treat torn ligaments and tendons because of its positive effect on connective tissues.

Glucosamine is a natural substance created by the body and found in certain foods. It plays an important role in the production and health of cartilage, the soft rubber-like padding that cushions the ends of bones and prevents them from grinding painfully against each other as the joint moves. It also helps develop ligaments, tendons, and nails.

Glucosamine stimulates the creation of glycosaminoglycans and proteoglycans, two vital building blocks of cartilage. Usually the joints make sufficient glucosamine to keep the cartilage in good shape, but as we age, we lose some of the glucosamine and other substances.

The cartilage can dry out, deteriorate, crack, or become thin from wear. Left exposed, the joints may become inflamed, stiff, swollen, tender and painful - a condition known as osteoarthritis or degenerative joint disease. (This condition is caused by the breakdown of cartilage. It is characterized by pain, joint damage, and limited motion.)

Creatine Monohydrate is an amino acid compound that is stored in muscle tissue where it is used to create the energy required by muscles. It is essential to muscle contraction and helps in the muscle-building process.

Chondroitin Sulfate is a powerful anti-inflammatory that seems to promote flexibility in tendons, ligaments, and cartilage. Glucosamine Sulfate appears to support the regeneration of cartilage and helps lubricate joint surfaces for easier movement and comfort. Creatine Monohydrate appears helpful for improving muscle strength and boosting energy.

An article in a 2003 issue of Drugs and Aging documents the results of seven studies designed to evaluate the efficacy of using glucosamine in osteoarthritis cases. In two such placebo-controlled studies, 414 patients with osteoarthritis were monitored during a three-year period.

Further, patients in the glucosamine group had much lower incidents of gastrointestinal disturbances, fatigue, and skin problems than those taking ibuprofen or arthritis drugs. The overall conclusion of the authors of the article was that in the short-term clinical studies they reviewed that glucosamine provided effective relief of symptoms associated with osteoarthritis of the knee. And, that glucosamine showed potential for modifying the progression of joint-related conditions.

In a study involving 1258 patients with knee joint conditions conducted by the University of Utah in Salt Lake City, researchers evaluated the results of five different treatments - glucosamine, chondroitin, a mixture of glucosamine and chondroitin, an arthritis drug (Celebrex), and a placebo. At the end of six months, researchers noted that patients taking the mixture of glucosamine and chondroitin saw the most improvement. Further, 79.2% of the patients with severe pain experienced a minimum 20% reduction in pain by taking the combination. In contrast, only 54.3% of the patients in the placebo group experienced any improvement in their pain.

In a double blind, four-week study conducted in China, 178 Chinese patients with knee osteoarthritis were divided into two groups. One group took a daily dose of 1500 mg of Glucosamine Sulfate and the other took 1200 mg of ibuprofen daily. The researchers monitored the level of pain for knees when they were at rest, during movement, and under pressure. The amount of swelling and mobility were also measured. Both groups experienced a significant reduction in pain symptoms. Researchers observed from the results that the glucosamine group tended to: 1) have greater symptom reduction, 2) experienced the positive benefits of the treatment for a longer period after it was stopped, and 3) have significantly less adverse side effects during treatment.

May increase shock absorption in the joints

May contribute to healthy cartilage

Methylsulfonylmethane (MSM) is a significant component of the bodys proteins, hormones, enzymes and tissues. It is present in many fresh foods, but it is destroyed through cooking, processing and storage. Supplementing with this nutrient ensures an adequate supply of sulfur.

Sulfur is an important structural component of the connective tissue that joins muscle to bone.

Hyaluronic acid (or HA) is an important component of cartilage and synovial fluid; it occurs naturally throughout the body. This molecule plays a crucial role in joint motion, the maintenance of joint homeostasis and skin support. HA promotes the viscosity and elasticity of the fluid surrounding the joints.

Joint Support is an herbal formula providing a host of nutrients beneficial to the structural system. Individual ingredients in this formula are traditionally used for the following:

NOTE: Pregnant or lactating women should consult their health care provider prior to taking this supplement.

Nutritional support for the structural system

Joint Health is an Ayurvedic formula that supports the joints and other connective tissues and may provide improved flexibility.

Ayurveda, Sanskrit for The Science of Life, is one of the worlds oldest recorded systems of natural health. Natures Sunshines authentic Ayurvedic formulas were developed in concert with Indian Ayurvedic masters and are composed of herbs direct from India. This formula contains Ayurvedic herbs for joint and structural system support. 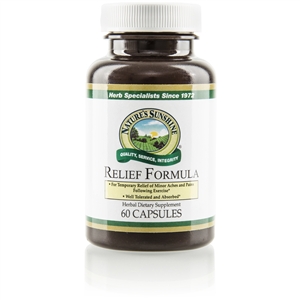 for temporary relief of minor aches and pains following exercise

well tolerated and absorbed by the body

This product is designed for relief of minor aches and pains associated with physical activities and exercise. It contains a proprietary blend of herbal extracts, including a protease enzyme blend and a special hops extract.

Best if taken on an empty stomach. Under times of body system stress, take 25 capsules.